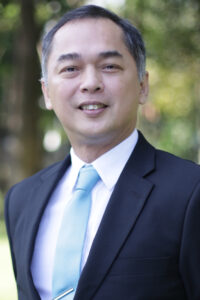 A graduate of the University of the Philippines, College of Law, Joel’s first foray into Rep was in South Pacific (1981), and has joined countless other musicals until he unofficially “retired” as Lun Tha in The King & I (1990). Joel has also done Rep’s Filipino adaptation of Gay Birds (2006), and since 2015 has been helping out Rep as an Observer-Director of its Board and as a member of the Rep Artistic Council. Joel toggles between Manila and New York and serves as Rep’s liaison for theater contacts in New York.