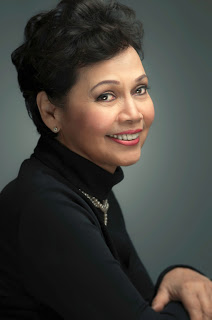 As a Capricorn Goat Joy Virata has taken the rocky path of theater for forty three years appearing in over a hundred and fifty plays and musicals, directing, being REP’s Vice President for Audience Development, Associate Creative Director, Founder and Creative Director of the Repertory Theater for Young Audiences, and finally was appointed Artistic Director of Repertory Philippines Foundation, Inc. for three years before stepping down in May 2019. Her favourite roles include Piaf in PIAF, Evita in EVITA, Sister Amnesia in NUNSENSE, Florence Foster Jenkins in GLORIOUS, Titania in A MIDSUMMER NIGHT’S DREAM and Portia in THE MERCHANT OF VENICE plus most of the comedies and farces that REP has been famous for. Her training includes university theater under Freddie Guerrero, a director’s seminar sponsored by the British Council in Middlesex, England and an eight-week workshop in Acting Shakespeare at the Royal Academy of Dramatic Art in London. However, her real training has been on the Repertory stage under the tutelage of Zeneida Amador. She has taken voice lessons from most of the famous Filipino voice teachers and enrolled at the UP Conservatory of Music for several years in voice performance. She has sung the roles of Tosca and Lady Macbeth in chamber opera. She also has a Master’s degree in Industrial Management from the University of the Philippines. She is grateful to her husband, Cesar, who has supported her in every possible way in the pursuit of her passion and to her children and grandchildren who do so as well.