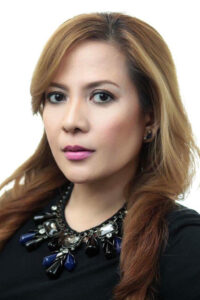 Liesl is currently the Artistic Director of Repertory Philippines. Prior to this, she held the post of Associate Artistic Director of The Cultural Center of the Philippines’ (CCP’s) resident theatre company Tanghalang Pilipino. Liesl is an Aliw Hall of Famer for having been a three-time Aliw Award Winner for Best Actress for her roles in WAIT UNTIL DARK, A PORTRAIT OF THE ARTIST AS FILIPINO and BALER SA PUSO KO. She is also a two-time Gawad Buhay Awardee for Best Actress in SWEENEY TODD and AUGUST: OSAGE COUNTY. With an extensive body of work with Repertory Philippines spanning a little over two decades and around 100 theatre productions, Liesl has showcased her versatility in such diverse roles as Maria in THE SOUND OF MUSIC, Audrey in LITTLE SHOP OF HORRORS, Luisa in The FANTASTICKS, Dorothy in THE WIZARD OF OZ, Philia in A FUNNY THING HAPPENED ON THE WAY TO THE FORUM, Emily Webb in OUR TOWN, Amy in AMY’S VIEW, Portia in THE MERCHANT OF VENICE, Juliet/Lady Capulet/Nurse in ROMEO AND JULIET, Beatrice/Hero in MUCH ADO ABOUT NOTHING, Theda Blau in IT HAD TO BE YOU, and a myriad other roles. She appeared at CCP Tanghalang Pilipino’s MABINING MANDIRIGMA and PANGARAP SA ISANG GABI NG GITNANG TAG-ARAW (A Midsummer Night’s Dream). She also appeared in GOLDEN CHILD, AMERICAN HWANGAP, and STAGESHOW receiving citations and awards for these roles. For the CCP, she directed BREAKING THE FOURTH WALL, as well as three family concerts featuring the Philippine Philharmonic Orchestra. Liesl has performed Off-Broadway in New York, as well as in various concerts/musical productions here and abroad. She hosted an interactive television game show in Budapest, Hungary and has worked in local film and television with the country’s most prestigious directors and has lent her voice to countless radio ads and jingles. She has taught acting workshops in Manila, Cebu and Naga, and she has also donned the cap of Assistant Director for Repertory Philippines and Tanghalang Pilipino theatre productions. Liesl is a Magna Cum Laude graduate of the University of the Philippines, former corporate finance consultant with SGV & Co., and former Treasurer of Repertory Philippines.