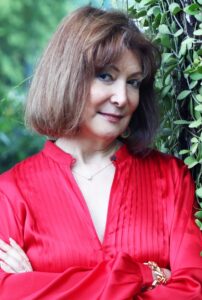 Like a true Barredo, Mindy Barredo Perez-Rubio is a thespian. She is the sister of Baby (Carmen) Barredo and theater has always been in her blood, even if she did not get to act in too many REP plays. However, she appeared in many pre-REP productions with Father Reuter, Peque Gallaga and Buddy Paez like Camelot, Finian’s Rainbow, You Can’t Take it With You, Fiddler on the Roof, Riders to the Sea, and two of the earliest REP productions, A Children’s Hour and Slow Dance on the Killing Ground. Once she got married, theater was over as she devoted her time to family. Mindy is a music major, graduating with a degree in Piano and Choral Conducting from St. Scholastica’s College School of Music. She moved to California and for 30 years was involved in many philanthropic organizations. She brings her leadership expertise in running an organization to Repertory Philippines and her goal is to bring REP’s legacy forward through the 21st century and to continue to uphold its status as the premiere theater company in the country. Currently, Mindy is Chairman of the Makati Garden Club, a member of Holbrook-Palmer Park Foundation Board, Chairman of Grounds for the Manila Polo Club and Board of the San Francisco Symphony Mid-Peninsula League. She served as president of Peninsula Volunteers Inc., Atherton Dames and Wall Street Women, Chairman of Meals-On-Wheels South San Mateo County, Commissioner of Atherton Arts Council, and chaired numerous fund-raising events, among them Festival of Trees, Sacred Heart Schools Auction, Atherton’s Day at the Park, and numerous Peninsula Volunteer Gala Events. She is the recipient of several awards including the Gentry Award, Atherton Civic Interest League Award, and received a Plaque of appreciation from her alma mater, St. Scholastica’s College, for her work in restoring the historic St. Cecilia’s Hall. Mindy is married to Carlos Perez-Rubio and together they have five children and ten grandchildren.