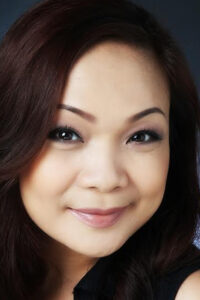 Naths, as she is fondly called, is one of Rep’s busiest actors and current right hand to Joy Virata in the Children’s Theater. Last year she appeared in all five productions that Rep staged starting with THE GAMES AFOOT all the way until A LITTLE PRINCESS. Some of her other recent productions in Rep are THE SECRET GARDEN (where she played Martha / Alice / Mrs. Shelly), SCROOGE, THE PRODUCERS, and AUGUST OSAGE COUNTY. She also appeared in SWEENEY TODD, JEKYLL AND HYDE, THE SOUND OF MUSIC, and FIDDLER ON THE ROOF. With much gratitude, Naths has been part of Repertory Philippines’ Theater For Young Audiences as a Performer, an Assistant Director, and on occassion, Choreographer, and Dance Captain. She was in SNOW WHITE AND THE SEVEN DWARFS, PINOCCHIO, MULAN JR., ALICE IN WONDERLAND, CINDERELLA, ALADDIN, and SEUSSICAL THE MUSICAL. Naths was also privileged to work with Cameron Mackintosh Ltd. In MISS SAIGON, where she covered the role of Gigi (London, Manila, Asian Tour, UK Nationals, UK Tam Tour), HEY MR. PRODUCER, and DO YOU HEAR THE PEOPLE SING. Her other theater credits include BLOOD BROTHERS, THE CHERRY ORCHARD, GAYBIRDS (Repertory Philippines), ONCE ON THIS ISLAND (Ephesus Teatron Group), UNDAUNTED (Stages), HOW I LEARNED TO DRIVE, JESUS CHRIST SUPERSTAR (both for Atlantis productions), KAOS (at the NPAT), WANDERS (PAGCOR), to name a few. Naths is most grateful for the opportunity to teach Musical Theater to aspiring teens, and wishes to impart her knowledge, and experiences to the next generation.